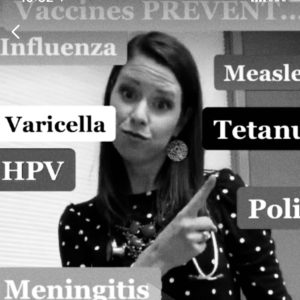 Following a post last week about the benefits of immunization, Ohio pediatrician Nicole Baldwin became the target of a coordinated anti-vaccine attack on TikTok, Facebook and even her office. Her story then became the subject of mainstream media news.

Of course, physicians as targets of the anti-vaccine mob is not new.

Bloggers and early era social media physicians were the subject of similar attacks during their confrontations with Jenny McCarthy. For years vaccine pioneers like Paul Offit and Peter Hotez have suffered from coordinated personal attacks.

But few, if any, USA Today features on the abuse.

Beginning to understand the tactics of the anti-vaccine mob

Because through the lens of the mainstream media it is news. Few consumers realize the extent of abuse sustained by those who advocate for kids. Fewer are aware of the guerrilla tactics used by the anti-vaccine mob against physicians.

So while it always has been newsworthy, it’s okay that it’s only news now.

But why now? Maybe the idea of a ‘doctor on TikTok’ adds to the tipping element of the story because TikTok is the last place anyone would expect to see a doctor.

Doctors and their obligation to participate

When you look at what Dr. Baldwin went through after this simple video it might make you wonder why any doctor would participate in this kind of thing.

Good question. But I suggested a decade ago that we have an obligation to be in these places in order to counter medical misinformation. And it is this sense of obligation, I suspect, that drove Dr. Baldwin to create her clip. She understands that platforms like TikTok present opportunities to meet our patients where they’re at.

But the media landscape is far more complicated than a decade ago when I first started thinking about these things. Coordinated assaults at the scale encountered by Dr. Baldwin are getting harder to counter. Initiatives like Shots Heard Round the World represent an amazing effort to counter the abuse. But these efforts present challenges at scale.

So is this kind of education and personal exposure still a physician’s obligation? I have to wonder. Dr. Baldwin’s experience is not what health professionals deserve when they decide to join the public conversation.

Social media platforms have no incentive to counter abuse

While bullying isn’t new, I always believed that the crowd would correct the rogue outliers – regulation wasn’t necessary. But the anti-vaccine misinformation warfare unit increasingly defies all normal social forces. Strong will and the use of ‘fire to fight fire’ by pediatricians will not be enough. The participation of doctors in the public conversation will require that platforms become part of the solution.

Flying monkeys engaging in coordinated brigading to harass and silence people is a problem that Facebook has downplayed and avoided handling for years and years. They pay lip service to “better moderation tools” in bad press cycles, but have delivered nothing remotely adequate … Users who have better things to do, important work to do, wasting hours of their time to manage what platforms won’t…to handle predictable, well-documented, repetitive harassment behavior. It’s embarrassing for FB at this point how bad their user-controlled moderation tools are..

But TikTok and other other more legacy social media players have no incentive to interfere with mass-coordinated abuse. Why would they? It is this division and emotion that drives attention. Dr. Baldwin’s efforts are the substrate of a new business model built on human friction, stress and discord. And overlying all of this is the fact that our social media chatter and behavior is raw material leveraged for targeted, revenue-generating opportunities. As Jaron Lanier has suggested, engagement is not meant to serve any particular purpose other than its own enhancement.

So the more attacks, the more views. The more attention, the more buzz, the more mainstream media and eyeballs and money.

The price Dr. Baldwin paid with the impact on her family and sense of well-being is the fuel for this perverse new economy.

And as long as there’s fuel there’s fire. And a story.