This is amazing. Two Korean doctors publish a study in The American Journal of Emergency Medicine with the intent of demonstrating that woman are as good as men with regard to endotracheal intubation.

But through the small, clouded American lens the suggestion of such an assertion is enough to draw blood. Which it did. Once identified, the Twitter outrage machine went in to full-force.

But few considered the publication within its cultural context.

While American physicians struggle for equity, there are other parts of the world that have achieved nothing close to what we have in the States. Korea has a huge sexism problem and is second to last in the OECD for the percentage of female physicians. So while it’s breaking news to the outraged, there are parts of the world that have no idea women can intubate as well as men.

Sarah Hearne hypothesizes what might have been behind this study:

…here we have a doctor at the beginning of her career trying to tackle that sexism by providing incontrovertible evidence that she and her female colleagues are every bit as capable of performing a life-saving procedure as her male colleagues. Why did they chose intubation? I can’t say for sure but the paper gives some hints.

“We hypothesized that… while successful endotracheal intubation may require both skill and strength, the importance of correct technique far outweighs physical strength.”

In other words, female doctors are being told they can’t be any good at intubation because they don’t have the requisite strength, and the authors of this paper are aiming to test this assumption.

People undertake projects and publications for reasons that aren’t always obvious during a seven second Twitter review. After it appeared that there was no nefarious intent by the authors, the social sentiment softened and pivoted to the idea that, on merit, the study maybe shouldn’t have seen the light of day. Or it might have been reframed and reworded.

While it’s hard to watch the mob. It’s harder to watch good people bow to the mob.

The apology (attached below) by these authors for harm done and the dogged commitment to seek retraction is heartbreaking. How these two professionals will even frame the reality of a retraction within a medical community that was already stacked against them is hard to imagine. And how will a retracted study intended to show equality fare for the future of a young, Korean female physician?

It’s remarkable how trained physicians and ‘people of science’ can make snap judgments based on publication titles and 240 word bits of information.

This is not how post-publication review should work. 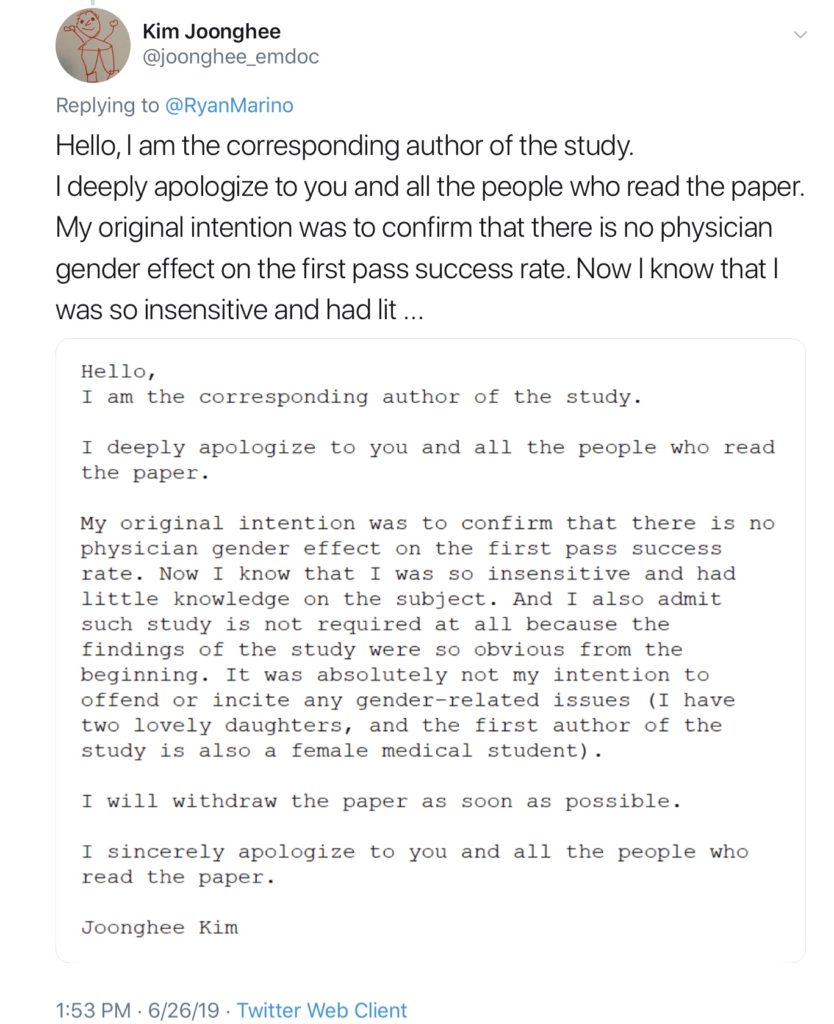