It’s a post you’ll see periodically:  Blogger goes on vacation and goes dark from his blog and Twitter.  This spawns the requisite post detailing how nice it was to be away.  Refreshed and all the stronger, we hear about the lessons from playing parchese, listening to the crickets sing, and ignoring the purr from Tweetdeck.

This week I have been on vacation but I didn’t necessarily unplug.  I screened for critical emails once a day.  I had prewritten and scheduled a couple of posts but they didn’t require much maintenance.  Besides that I was too busy boogie boarding, kayaking and eating crab cakes to really look at Twitter.

But what was totally unexpected was the fact that we spent a fair bit of time on Facebook.  I’m not a huge Facebook person but my wife had picked up on the Hilton Head Island Facebook page and it turned out to be an incredibly helpful resource.

We were cued in to the location of dolphin sightings, an unexpected prediction of the northern lights, insight on a concert/fireworks display at Shelter Cove as well as tips on a number of off-the-beaten-path restaurants that even our concierge didn’t recognize (check out Signe’s for lunch).  Listening to the island’s dialog take place from both innocent visitors and experienced insiders gave us a real feel for certain things to do or avoid.

And I felt neither connected nor disconnected.  Our use of Facebook in this context was neither an obsession nor a business obligation.  It was pretty natural.

In his new book, Cognitive Surplus, Clay Shirky makes the point that the divide between being ‘online’ and ‘offline’ may be evolving as a thing of the past.  He tells us, “Our social media tools aren’t a alternative to real life, they’re part of it.  They are increasingly the coordinating tools for events in the physical world.” Two worlds once divided are increasingly becoming one.  They feed off of one another.  I felt it this week. 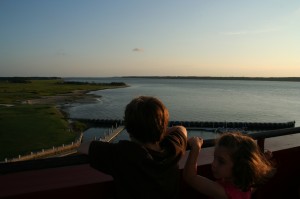 There’s no question that Twitter can be a jealous mistress.  Social’s draw can create an unhealthy preoccupation for some.  In that case unplugging is probably the solution.  But I suspect that as time passes this ‘now I’m in/now I’m out’ dichotomy will give way to a more balanced, healthy relationship with our networks.