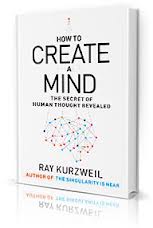 Review of How to Create a Mind. As Watson makes his march toward clinical reasoning, the idea of a computer replicating the mind of a physician doesn’t seem that far off.  Despite wide skepticism of this eventuality, the evidence supports that machines will ultimately be able to do a lot of what I do in my clinic.

That’s the idea of Ray Kurzweil’s new book, How to Create a Mind – The Secret of Human Thought Revealed.  He suggests that we’re getting closer to simulating the human brain.  With the gathering of the blueprints of the human body through the delineation of the genome and the emerging 3D map of the brain’s connections (The Human Connectome Project), medicine and human biology are evolving as an information technology.  Kurzweil reminds us that once technology becomes an information technology, it is then subject to the law of accelerating returns (LOAR).  Expectations about what’s possible move from a linear scale to one that’s exponential.

How to Create a Mind presents the idea that the neocortex (the area of our brain responsible for critical thinking, reasoning, etc) works on a basic algorithm of hierarchies and pattern recognition.  The implication is that these principles can be engineered to extend the powers of our own intelligence.

He builds the case that the mathematical techniques that have evolved in the field of artificial intelligence (such as those used in Watson and Siri) are mathematically similar to the methods that biology evolved in the form of the neocortex.  In fact, the design of artificial intelligence systems has been converging with the way brains developed.

Kurzweil’s book is important as we extend the reach of our abilities using AI.  Rather than replace us, technology will enhance what we have evolved through our neocortex.  We are already extending our thinking and memory to the cloud.

Kurzweil often uses the words extend and enhance in reference to our evolving relationship with technology.  This fits nicely with my belief that physicians won’t be replaced, but radically redefined.

Beyond some spurious dialog of computer modeling, the book is cleanly written and well-argued.  The chapter on consciousness offers an amazing discussion of how a computer can (or can’t) replicate a human mind.  The author finishes by taking on objections to his ideas.  Highly recommended.

While the brain has been considered by many to be beyond the scope of comprehension, history is replete with claims of what couldn’t be done.  How to Create a Mind offers a thoroughly supported argument for the eventual reverse engineering of the human brain.