In 1994 when I was a first year gastroenterology fellow cell phones were expensive and scarce. When I was on call I stayed close to the house and my personal land line phone. If I was paged out at dinner I used a pay phone or begged the hostess to borrow the house phone. 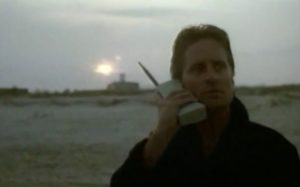 So we petitioned our division chief to buy a cell phone for fellow use during weekend call. It was only for emergencies when we couldn’t access a pay phone. The phone was the size of a brick but it didn’t matter since I felt as important as Gordon Gekko in the beach scene of Wall Street.

As cell technology got cheap, everyone used their own phone and their own minutes. We never complained because burning a couple of expensive minutes was always cheaper than the consequences of standing at a pay phone in a bad part of Houston.

Then minutes got cheap and, ultimately, free. Phones got cheap, or free. The fellow’s phone ultimately disappeared. The cell phone became a smartphone. And as time has passed my personal smartphone evolved as the hub of my medical communications. I never questioned it and only saw it as a convenience.

5 months ago I turned in my pager for the last time. At my hospital we recently implemented Spok, a mobile phone based enterprise communication platform that has replaced pagers. It allows us secure doctor-to-doctor messaging on personal smartphones. The best part is that page notifications push to my Series 2 Apple Watch while executing cannon balls in my pool. I never saw that coming in 1990.

But not all physicians feel that enterprise health applications deserve real estate on their personal phone. Some have suggested that institutions should provide phones for hospital-based tools. To their point the mobile diagnostic space is changing faster than IT protocols can keep up. And while you can quibble about where we park a simple paging app, phone-based cardiac imaging devices and other bedside diagnostic tools are close at hand.

I loved turning in my pager for the last time and I get jazzed about page notifications in the deep end of my pool. But, for the record, I’ll die or retire before carrying a second ‘hospital smartphone.’ I’m happy being paged to my personal device.

Expect a turf war around which health apps live where and what access an institution has to data and activity on a physician’s (or hospital’s) device.