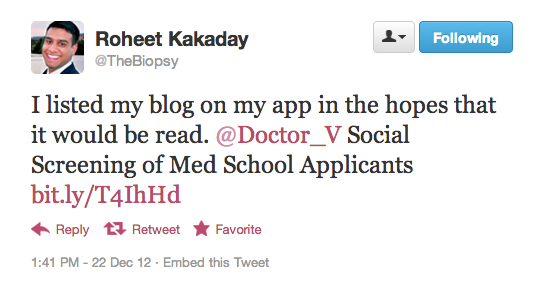 I was struck by this tweet from Roheet Kakaday, a premed student. It followed a brief thread about the rehearsed presence of the med school applicant and the potential role of a digital life stream/portfolio.

Roheet is someone worth looking at.  He writes on his blog, The Biopsy, where he sticks his neck out to connect his ideas with the world (beautiful site design, I might add).  Most premeds I’ve met work desperately to avoid being seen.  A scorched earth policy regarding public presence rules the day.  They’ve learned to never stray away from the group.  Most prefer to cook with a timeless recipe:  maintain a high GPA at any cost, invest time, money, passion and bandwidth into a prep course for the MCAT and, most importantly, ‘volunteer in a hospital’ so you’ll have something intelligent to say in an interview.

This recipe fuels a distinct population goose stepping into the future assuring that the mindset of the next generation of physicians won’t be much different than generations past.

We need more doctors willing to define themselves and their passions.  And that starts with students willing to say, ‘Here I am. What I bring to medicine will be really different. You can see what I’ve done.  You may not like it but it’s who I am.’

I first met Roheet at Stanford’s Medicine X where he spent the entire meeting in the front row.  His coverage of the meeting was profiled live during Medicine X by director and Stanford Professor, Dr. Larry Chu.  Most med school applicants have never heard of Medicine X, which is fine.  But the reality is that even if they knew and the meeting happened in their back yard, I suspect many wouldn’t be interested.  It’s too risky, too unknown.  And besides, it would be precious time away from MCAT test preparation.

If I were looking to create leaders to bring the medical profession onto the 21st century, I’d look for someone like Roheet. I don’t know anything about his numbers.  But so long as he has the capacity to make it through, he has the ability to change the way our profession sees the world.