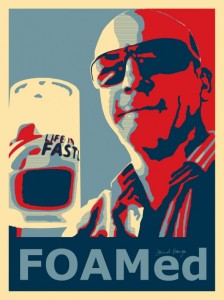 After a recent presentation on social physicians, someone asked why there were so many emergency medicine physicians on blogs and social media?  Good question.  From content to conversation, ER docs are heavily represented in public spaces.  And it’s as much about passion and participation as raw numbers on any given platform.

What is it about emergency medicine physicians that has lead them to flex their muscles and reach out beyond the confines of their emergency centers?

Early leadership.  Some of the earliest public voices were ER docs.  Think GruntDoc.  He was narrating his ideas as an ER physician before most doctors were even using the internet.  Mike Cadogan of Life in the Fast Lane served as an early global leader for emergency physicians.  My server space at Media Temple isn’t big enough to contain the names of those who made an early impact.  But early, visible leadership set the stage for public participation in a permission-based profession.

FOAM.  Born from the ER community (and its Guinness-inspired, intellectual midwife, Mike Cadogan), FOAM is the movement that has spontaneously emerged from the collection of constantly evolving, collaborative and interactive open access medical education resources being distributed on the web.  This idea of translating and sharing what’s know for a broader audience has given physicians a context and structure in which to share.  While not restricted to emergency medicine, FOAM as a concept offers meaning to our public presence.  It’s consistent with our emerging open culture.  It offers an element of community and brings docs together.  It’s easy to step up and out when there’s a reason to be there.

Culture of emergency medicine.  Emergency medicine physicians are some of the most resourceful people I know.  The new tools of democratized media require us to simply try new methods and tools of communication to see how they work.  I would submit that this ingrained culture has contributed to a strong presence where other physicians might be reticent to participate.

There’s lots to think about here.  What have I missed and how would you have answered this question?