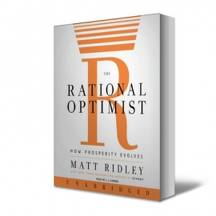 I just finished The Rational Optimist by Matt Ridley.  And here’s the good news:  The world apparently isn’t screwed.  Listening to the pessimists who have hijacked the public discourse I would have thought otherwise.

This book is powerful.  In a work that covers the sweep of human history from the Stone Age to the Internet, Ridley offers up a rich assessment of human civilization and how we got where we are.  Ridley not only tells us how the human condition is getting better but he tells us why.  One of Ridley’s core assertions is that collective intelligence is at the core of our success.  Our extraordinary capacity to change lies not within our brains, says Ridley, but rather between brains.  It is collective intelligence that has brought us to where we are.

“There was a point in human prehistory when big-brained, cultural, learning people for the first time began to exchange things with each other, and that once they started doing so, culture suddenly became cumulative, and the great headlong experiment of human economic ‘progress’ began.  Exchange is to cultural evolution as sex is to biological evolution.”

Ridley’s asserts that the accumulation of knowledge and the division of labor by humans has allowed for the ‘creation’ of time.  At times The Rational Optimist could be mistaken for a deep dive on Clay Shirky’s Cognitive Surplus.

In the end, Ridley is terminally ‘bottom up’ in his view of the world in 2100.  Complexity and new ideas will emerge spontaneously through exchange and specialization at the grassroots level.  Large corporations, governments and monolithic bureaucracies will give way to a workforce of free agents.  Ridley predicts the expansion of what’s been referred to as catallaxy – the spontaneous order created by exchange and specialization.

This book has relevance to understanding the role of digital connectivity in our future.  While offering an epic assessment of human cultural evolution, The Rational Optimist maintains that the best of the human race is yet to come.

A nice message for the holidays.