I’ve always suggested that when we publicly put a human face on the victims of vaccine-preventable disease we would begin to win the war against antivax propaganda.

This month Texas Children’s Hospital published Vaccine-Preventable Disease – The Forgotten Story, a compilation of first hand stories told by the families of those touched by vaccine preventable disease. Vaccine-Preventable Disease – The Forgotten Story is written and produced by the experts in the Texas Children’s Hospital Center for Vaccine Awareness and Research (CVAR) and is sold at cost.

Vaccine-Preventable Disease – The Forgotten Story is impressive in its simplicity. Flipping through you can’t help but be drawn to the compelling first-hand narrative of families touched by preventable childhood illness. Each story is matched with black and white photographs that are as much haunting as touching. I can’t seem to put it down.

Behind each person who has contracted a vaccine-preventable disease is a story of a life interrupted, a family devastated. This book tells the long-forgotten story. It will be a game changer in the battle against fear and misinformation.

In just a few short weeks since its initial printing Texas Children’s Hospital has sold over 15,000 copies and demand is escalating. As an understated but powerful social essay, I predict that Vaccine-Preventable Disease – The Forgotten Story will reach distribution in the hundreds of thousands and serve as an emotional anchor for those looking to advocate for those who can’t advocate for themselves.

You can purchase your own copy here.  The Forgotten Story posters for seasonal flu, measles, hepatitis B and pertussis are also available. 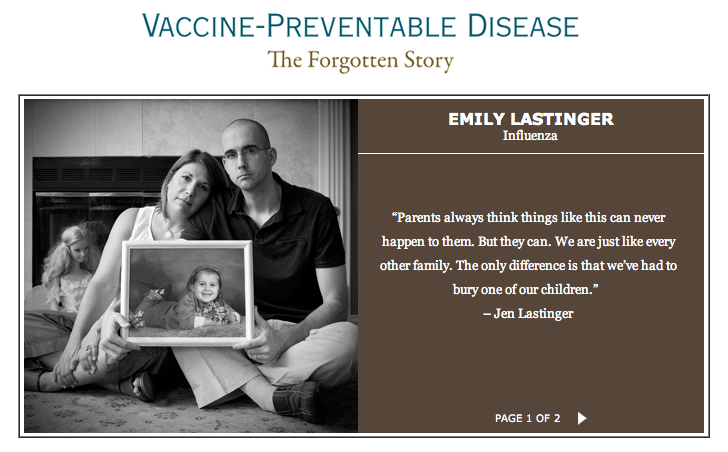