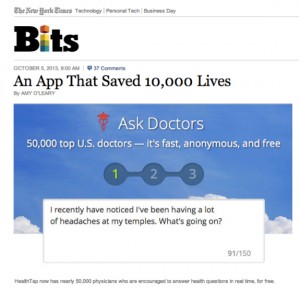 This post from Joyce Lee is worth a peek.  It represents the growing importance of the public physician’s eye and voice.

The short version goes like this: Last week HealthTap began a campaign suggesting that they had saved 10,000 lives.  On the twittersphere the catchy suggestion saw traction.  The most surprising people blindly RT’d.  Even the New York Times sold the wonders of HealthTap by headlining all the precious lives saved.  But few spoke up and no one asked for evidence.  Joyce started things and created a conversational vapor trail questioning the dubious claim.

But HealthTap isn’t the first platform to spawn the things worthy of discussion.

As technology and the individual patient assume a greater role in facilitating health care, we often ask, what will become of the physician?  How will we as a profession shape our role in a radically changing environment?

I have an idea:  Perhaps we should take our hard fought, real-world know-how and apply it in a meaningful way in public.  Maybe we should speak up and talk about why something may not be such a good idea.  The social health bubble is cluttered with mindless sharing that suggests every new app offers a shiny future.  Every stat is taken and retweeted at face-value.  Social presence has taken the dangerous turn of being more about how you look sharing than what you’re sharing.

The health community needs more sparring, debate, and criticism among health professionals.  The medical community is simply too quiet, passive and uninvolved.  And as Joyce has shown, don’t count on the mainstream media to keep an eye on things.  It seems they’re accountable to no one but shareholders, advertisers and fawning publicists.

Health dialog has become a 24/7 spin cycle hijacked by those claiming to have the patient’s interest at heart.  Like pharmaceuticals of old, new technologies will look to draw direct-to-consumer attention, bandwidth and money.  As public dialog grows and as conversation plays a greater role in what we understand and believe, medical professionals are in a unique position to counter those shiny objects promulgated as inevitable.

I’ve done my share of technoevangelizing.  I’m optimistic and generally deterministic in my views about technology and its place in the future.  But that doesn’t mean that I shouldn’t be more balanced in the way I see things.  In fact I was even bullish on HealthTap early on.  But I’m learning as I go.  And as my audience grows I’m recognizing the responsibility of a public physician’s eye and voice.  Especially when the numbers don’t seem to make sense.