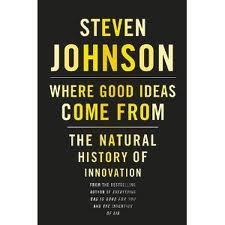 Did you ever wonder how innovation happens?  I just finished Where Good Ideas Come From – The Natural History of Innovation by Steven Berlin Johnson which tackles this very question.

Drawing from examples across multiple disciplines, Johnson builds the case that throughout history and nature there are recognizable patterns associated with innovation.  By embracing these patterns he argues that we can build environments that nurture good ideas.  Ideas breaks the roots of innovation down into seven patterns, each constituting a separate chapter.

Ideas suggests that in the end openness and connectivity may be more valuable to innovation than purely competitive mechanisms.

“If there is a single maxim that runs through this book’s arguments, it is that we are often better served by connecting ideas than we are by protecting them.  Like the free market itself, the case for restricting the flow of innovation has long been buttressed by appeals to the “natural” order of things.  But the truth is, when one looks at innovation in nature and in culture, environments that build walls around good ideas tend to be less innovative in the long run than more open-ended environments.  Good ideas may not want to be free, but they do want to connect, fuse, recombine.  They want to reinvent themselves by crossing conceptual borders.  They want to complete each other as much as they want to compete.”

In the final chapter he builds the contrarian case that financial rewards are less likely to spur real innovation.  Purely incentivized innovation, he suggests, facilitates barricades and secrecy “making it harder for the open patterns of innovation to work their magic.”

Ideas is something of a natural follow up to The Ghost Map and The Invention of Air, both of which I have read and recommend.  Johnson has even suggested that this represents the conclusion of what he views loosely as a trilogy in human innovation.

Read Where Good Ideas Come From.  It will force you to make connections in areas you never knew existed.  Ideas will challenge you to think across disciplines – a concept sorely missing among the medical-industrial complex.  But as an incorrigible SBJ fanboy my glowing recommendation may not carry the weight of other more prestigious and less biased publications.  So take it for what it’s worth.

Just for fun, listen and learn about the Steven Johnson’s writing habits.  I love hearing how successful people work.

If you like the sounds of this I’m guessin’ you’ll like The Rational Optimist by Matt Ridley or Making Ideas Happen by Mark Belsky.

(The above Amazon links are affiliate links)