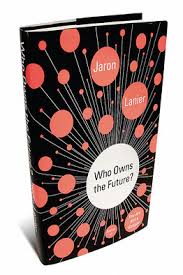 I recently had a read Jaron Lanier’s Who Owns the Future?  This is a fascinating read that offers a critical look at today’s internet business models.

Lanier is preoccupied with the power of Big Tech and the marginalization of the middle class.  The Internet creates wealth in a very few, Lanier argues, and does so at the expense of the end user.

“The primary business of digital networking has come to be the creation of ultrasecret mega-dossiers about what others are doing, and using this information to concentrate money and power. It doesn’t matter whether the concentration is called a social network, an insurance company, a derivatives fund, a search engine, or an online store. It’s all fundamentally the same.  Whatever the intent might have been, the result is a wielding of digital technology against the future of the middle class.”

Lanier envisions a future where content and ideas are attributable to the individuals who created them.  At the root of his thesis is the belief that information is not some freestanding thing, but rather a human product deserving of attribution and cash.  At its core, this book is about futuristic economics.  Social networks see you as the product, Lanier envisions all of us ultimately as partners.

It’s around this that Lanier builds the argument and makes his case.

He envisions a sustainable system that will continue to honor and reward humans, no matter how advanced technology becomes.

“In the event that something a person says or does contributes even minutely to a database that allows, say, a machine language translation algorithm, or a market prediction algorithm, to perform a task, then a nanopayment, proportional both to the degree of contribution and the resultant value, will be due to the person.”

“The project at hand is to imagine leveraging network technology to create a smoother kind of path to achieving ordinary, middle-class financial security.”

The problem, it seems, are the siren servers.  This is Lanier’s term for those monopolistic entities that control our digital lives.

“Siren Servers gather data from the network, often without having to pay for it. The data is analyzed using the most powerful available computers, run by the very best available technical people. The results of the analysis are kept secret, but are used to manipulate the rest of the world to advantage.”

Lanier’s technosocialist view of the networked world is heady and ambitious.  Regarding the likelihood of its eventuality: I’ll eat my scrub cap on the main stage of Medicine X when Patients Like Me allocates its margins to the patients that selflessly fuel its success.

In the end, Who Owns the Future? manages to balance a realistic view of technology’s future with the need for humanistic information economy.  His style is easy.  And as one of Silicon Valley’s founding fathers of virtual reality, he knows what he’s talking about.  The first hand historical elements of Silicon Valley’s early days alone are worth the read.  In following his first book, You Are Not a Gadget, Lanier is emerging as one of our generation’s most authoritative critics of technologic advancement.

While I thoroughly enjoyed Who Owns the Future, this book is heavy and recommended only for hard core futurists.