Yesterday Doximity announced the launch of Career Navigator – the first doctor-driven, grassroots look at physician compensation trends. Some 18,000 verified practicing physicians began sharing anonymous compensation data over the past four months. The resulting interactive map is available free to any US physician through Doximity and includes compensation trends for 48 specialties down to the county level updated in real-time. This is your go-to for physician salaries . 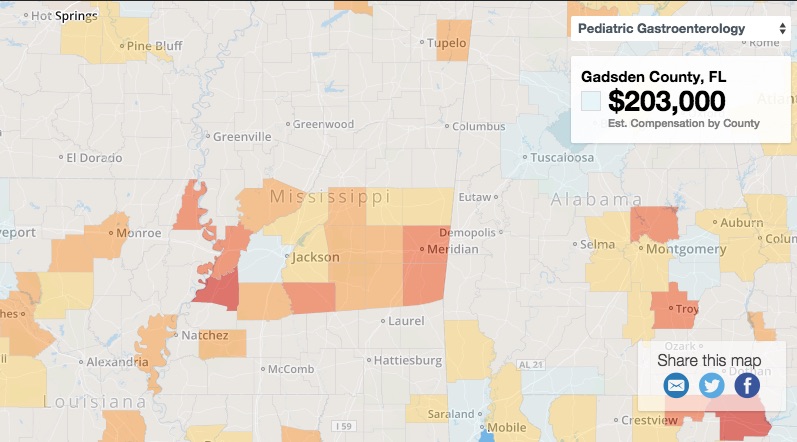 It’s crazy fascinating.  I could spend hours gliding the cursor over the US map to see who’s got what where.  In fact, I’ve given up staring at Tweetdeck to follow physician income trends.

I’ve jumped in despite the fact that I’ve always been skeptical of physician salary reports.  They’re classically perverted by a number of complicated variables including the fact that people want to feel far more important than they really are.  It’s interesting that as I entered my own salary, I felt no hesitation putting it out there just as is.  In fact, I felt a strange sense of obligation to my peers to to put it out there as is.  It was cathartic while at once empowering.

If you’re a doctor, here are a three things to pull away:

1. Know your worth – Professionals in other careers have had transparency in  salary trends for years, but this is the first time physicians have free access to up to date compensation trends for 48 specialties at the county-level.

2. Think outside Boston – I grew up in Boston and I’ve learned that some of the country’s best medicine, and doctors, are nowhere near Beantown.  And the salary differences can be downright frightening.  Major urban areas, where medical schools abound, have some of the lowest physician salaries in the US. You may be trading ego for hundreds of thousands of dollars a year in pay.  But suit yourself.

3. Land in a flyover state – A general surgeon in Los Angeles could make $118,000 more a year by moving to Anoka County, Minnesota. Or an anesthesiologist in Massachusetts would on average increase their salary 61 percent by relocating to Wisconsin.  And the cheese is better.

If for nothing other than having a little fun, check out Career Navigator.  If you’ve not contributed, do your duty to God and country and tell us whatchya makin’.  It’s all privatized and encrypted.  While no one will know it’s you, we’ll be watching.