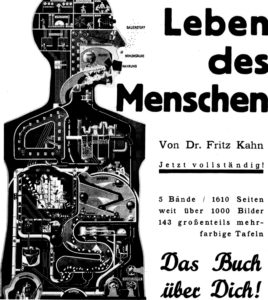 Berlin physician Fritz Kahn (1888–1968) was a science writer, illustrator and polymath who paired human physiology with industrial systems. His piece de resistance, “Das Leben des Menschen” (The Life of Man, 1922–1931), used visual analogy, metaphor and contemporary design to represent the human body. Kahn popularized the infographic at a time when our reductionist understanding of the human was beginning to hit its stride. As summarized in Wikipedia, Kahn described the human body as “the most competent machine in the world,” and his work reflects Germany’s technical and cultural state during the Weimar Republic.

German animator Henning M Lederer resurrects Kahn with sound and motion in this new visual rendering of Man as Industrial Palace. As described by Aeon, “Lederer’s update offers a visually and conceptually rich melding of technology, biology and design, echoing a time when machinery permeated the collective consciousness in a manner quite similar to computing technology today.”

Check out the newly digitized Public Physician – your comprehensive guide to life online as a health professional.