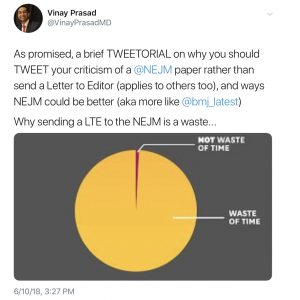 Recently Dr. Vinay Prasad published a Tweetorial covering why Twitter might be a better place for editorial commentary than a formal letter to the editor. This week Paul Sufka riffed on the ANA. Interesting ideas and a new and interesting use of Twitter.

Long-form Twitter is the spawn of its move to 280 character tweets and our ability to daisy chain them in new strings called threads. But is Twitter the best place for our long-form ideas?

Twitter has traditionally been second class in search. Short-term twitter chatter and threads play well to the current conversation. After the stream has cleared it may be hard to find them. We’ll have to see if the Google spiders treat Tweetorials as first class bits of information for search.

Threads suck for long-form. From a user’s perspective, grappling with someone’s thinking in 280 character nuggets can be challenging. Sure it’s in-line with the way alot of us communicate (using Twitter), but it may not the optimal way to present a 500 word idea. I’m guessing that for many, the editorial design of a post like this is easier on the eyes than the 10 tweets needed to make it a Tweetorial.

Twitter is a better outpost than core property. Our thinking can live in a number of places. Some spots are better for links and simple ideas. Others do better for long-form stuff. There are media that are temporary and fleeting and others that are more permanent. I like to think of this as the medical media continuum. Stock and flow has also been used to describe this division of quick ideas and more lasting stuff.

Novelty trumps utility in the short term. New technology gets fetishized. Just because a media application allows you to do something doesnt mean it’s the best way to push your idea into the world. We all went through this with Vine, Meerkat, periscope. Shiny object syndrome is endemic among public physicians. While early adopters will often argue the benefits, we have to consider if the utility beats the novelty of the new thing.

We’re all microcelebrities. While we’ve got lots of followers, the truth is that many of us are most influential in the tiny echo chamber of Twitter. And the reality is that despite how many likes and retweets an idea achieves, Twitter is a tiny silo in a big information ecosystem. So to get the reach we want to change ideas, we need to consider our reach beyond Twitter.

The market will bear out the future of the tweetorial

I firmly believe that all of us should be poking at these applications to discover their most creative uses. But what any of us think is less relevant than what sticks with the public community of physicians. The market will bear this one out.

I love Sufka’s lessons on ANA. Prasay’s thread is a bold call to action that challenges the medical industrial publishing complex. It’s an important reminder that we are the publishers and no longer live in a permission-based system of launching ideas to the world.

We just need to remember that there’s a big medical world and a whole lot of eyeballs beyond our Twitter space. Let’s put our brilliance in the right place.