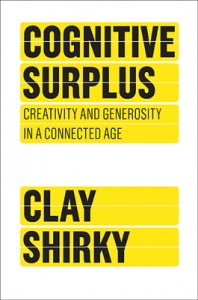 Apparently we’ve got a lot of time on our hands.  That’s according to Clay Shirky in his new book, Cognitive Surplus – Creativity and Generosity in a Connected Age.

It goes something like this:  Things have changed since the mid-twentieth century.  The postwar trend of urban growth and rising education lead to an abundance of folks paid to think or talk rather than produce.  This postindustrial transition created an abundance of free time for us.  Clay Shirky refers to this aggregate potential of time and energy with the newfound capacity to create as the cognitive surplus.  It’s effectively the potential to do together what was never before possible.  Free time is a social asset to be harnessed for the greater good, Shirky tells us.

Cognitive Surplus starts with this basic assertion and drills down to how the availability of this resource has set us up for where we are today.  Because free time alone, of course, isn’t enough to cause the changes happening around us.  If that were the case the revolution that we’re experiencing would have occurred half a century ago.  It’s the availability of new tools and opportunity that are allowing us to leverage the cognitive surplus.  Cognitive Surplus explores our intrinsic motivations to participate and finishes with the challenge of figuring out how we might use this resource to produce real civic value.  Big picture stuff.

All of this is weaved together in a well-referenced, 200 page argument that’s relatively brief given the size of its message.  Cognitive Surplus is an easy read and I highly recommend it to anyone trying to grasp what’s happening around us.

As someone who thinks a lot about this stuff, Clay Shirky helps me understand the redefinition of media in the broader context.  And while there’s no shortage of people talking about the forces behind the social media revolution, there’s nothing of the depth and insight seen in Cognitive Surplus.

Read Cognitive Surplus.  Let me know what you think.