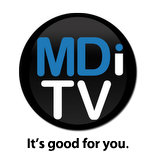 When I picked this up today on Twitter I had to ask myself, “Is the infosphere really lacking in health videos?” Of course not. But what it does lack is quality, slightly-more-in-depth vetted programming that caters to an expanding population of educated e-patients. Network web reporting – too superficial and suited to a multitasking general population. Major health sites such as WebMD seem mired down in painful 1.0-like infrastructures.

MDiTV would appear to be positioning itself as the stand alone solution.

When I called MDiTV’s CEO Dr. Bobby Lazarra this afternoon, he promised me a ‘Web 3.0 experience with health news in real time.’ Fair enough. But while live operations pumped to iPhones may attract media chatter, I’m turned on by the simple prospect of quality video programming that I can recommend to my patients and peers.

What did catch my attention was their soon-to-be-released Second Opinion program which will offer a point-counterpoint dialog between two physicians on select health topics. I honestly think the public can learn a lot from publicly arguing doctors.

MDiTV’s development is likely a sign of the times – the spawn of a decomposing mainstream media growing in a niche unfilled by the amateur video ecosystem.