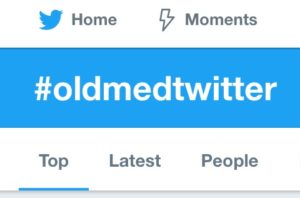 As doctors grow in numbers on Twitter we tend to collect in silos based on ideology, etc. But know you’ve reached critical mass when we can curate tweets based on perceived generational differences among physicians. Check out #oldmedtwitter.

Social media can be remarkably powerful. It can bring us together as well as pull us apart. Time will tell whether OldMedTwitter will bring folks together. Tongue-in-cheek memes mashed up with the real-time flow of conversation have a way of exposing previously unseen views and beliefs.

My fav #oldmedtwitter quote to date: “Hey new docs, don’t listen to assholes from oldmedtwitter.” But despite the half-assed attempt by some to segregate themselves from those considered old, most of us over the age of 29 have taken it all in stride.

As we’ve seen many times over, you can’t control how people use a hashtag and you certainly can’t control the conversation. But as our online community and culture grow, we want to be sure that we don’t create circumstances that divide us.

In The Filter Bubble, Eli Parisier noted that “the structure of our media affects the character of our society.” And so it goes for medicine’s online culture.

If you like this you can check out how female physicians are collecting around a variety of interesting hashtags.