A recent STATNews First Opinion piece suggested that we’re seeing the abandonment of telemedicine by physicians after a strong start in 2020. Data from Phreesia shows early adoption in March 2020 with a fall off in May – This pattern reflects the earliest phases of the telemedicine hype cycle. 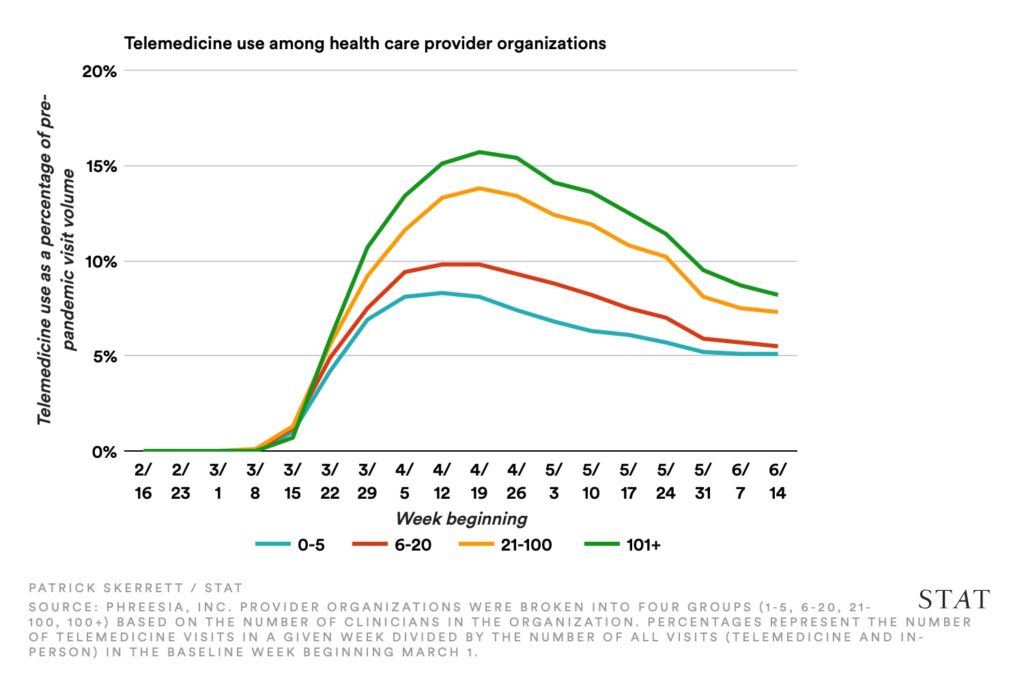 Distracted and disillusioned maybe. Abandoned, no.

So what happened? Telemedicine is having its moment on the Gartner Hype Cycle. The hype-cycle provides a conceptual model of the maturity of emerging technologies through 5 phases. We see a new technology. Then we jump on board, feed the hype, fantasize a little bit and inflate expectations about what the new technology can do. After a flurry of hype we realize it wasn’t all that it seemed and we crash. But ultimately we come to our senses and realize that there’s probably some value to the new tool and we find where it fits.

Telemedicine saw nearly overnight adoption with the explosion of COVID19. As the pandemic unfolded in New York we saw peak technoutopia unfold on social spaces like Twitter. The future had finally arrived, we were told, and telemedicine would change the world. For those who had built their world around telemedicine, this was their moment. Telehealth stocks spiked.

Enter the trough of disillusionment

But something happened on the way to paradise. Our optimism gave way to reality.

Loss of revenue. We learned quickly that revenue from teleconnection is not what it is for IRL care. For hospital systems the loss of facility fees created a gravitational pull back to in-person visits. For an industry working on slim margins our archaic system of reimbursement prevented telemedicine from evolving as a sustainable, new way of caring or doing business.

The reality of caring for humans. The craziest angle of the telemedicine spike was the way the medical community almost universally abandoned the physical exam. For a brief moment in time physicians elected to deliver care without any physical data from the patients. But despite the honeymoon of believing that everything in medicine could be conducted virtually, we learned that teleconnection was good for a lot of things but not everything. It was the Bonobos Effect: some things have to be done in person.

Teleconnection can be hard. And then there were the challenges that came with video. There were the technical elements of working with patients who couldn’t figure it out. There was the adjustment to hours of human video connection – doctors reported a level of exhaustion disproportionate to the number of patient encounters. More on my ideas around telemedicine fatigue here.

So as America and its clinics began to open up after the first COVID wave we regressed to our 20th century comfort spots.

So what about the idea that the future had finally arrived? It did arrive but it just wasn’t evenly embraced.

And this was because the early adoption of telemedicine occurred out of necessity rather than value. Because at a time of strict social isolation, teleconnection was all we had to both to deliver care and maintain a stream of revenue. Wide, temporary adoption was not surprising. It was necessity. With that necessary move we overplayed telemedicine’s disruption of the traditional care model.

But telemedicine does bring value

But maybe we got ahead of ourselves. Telehealth brings real value. It’s a matter of identifying teleconnection as one very powerful tool in the evolving care space. Not the only tool. In our large hospital-based practice caring for a large population of medically complex children from the far reaches of Louisiana, Oklahoma and west Texas, telemedicine plays a vital new role. Simple check-ups for medically complex children far removed from our traditional ‘point of care’ brings tremendous value to families. It allows tighter contact and follow-up when high-touch care isn’t necessary. How remote care fits precisely in to our model is under careful evaluation.

The past few weeks have been interesting and offer one example of how technology disrupts (albeit transiently) an industry. More interesting than this early peak of inflated expectations is the longer plateau of productivity that we will realize with the telemedicine hype cycle.

Stay tuned for more on telemedicine’s plateau of productivity. To stay informed be sure to subscribe to the 33 charts newsletter.