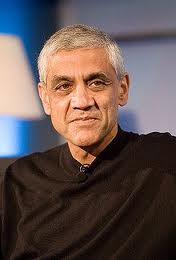 Recently Vinod Khosla, founder of Sun Microsystems, keynoted Rock Health’s Health Innovation Summit where he offered a bleak outlook on the future of the MD.  David Shaywitz at Forbes has some interesting commentary that’s worth a peek.  Davis Liu and Venture Beat’s Matt Marshall offered nice reviews.  Khosla’s Techcrunch piece, Do We Need Doctors or Algorithms, is required reading for anyone with a lens on the future.

Khosla’s recent views on medicine were best summarized by Shaywitz and are as follows (not verbatim):

Despite predictable indignation from the medical community, Khosla’s vision isn’t far off the mark. Much of what we once did with our eyes, ears and hands will be replaced by diagnostic and predictive technology.  This is already happening.  The older generation doesn’t want to believe it.  The millennials don’t know anything else.  I might add, however, that I prefer to position the physician’s future as marked by radical redefinition rather than outright displacement.

I do have issue with the growing belief that physicians lack the capacity to participate in shaping or envisioning the future of health.  Our profession is undergoing what may be its most dramatic change in modern history.  I’m confident that a new generation of medical leaders will emerge that will counter current assumptions about doctors and change.

Khosla’s a remarkable guy with some provocative ideas.  I regret that I wasn’t in the Rock Health audience when he challenged physicians to counter his assertions – not because I disagree but because this subject is in need of visible dialog.  My greater regret is that his challenge was met with silence.

And that tells me either everyone’s on board with Vinod Khosla, or there’s truly no hope for our future.